A New Color at My Bird Feeders 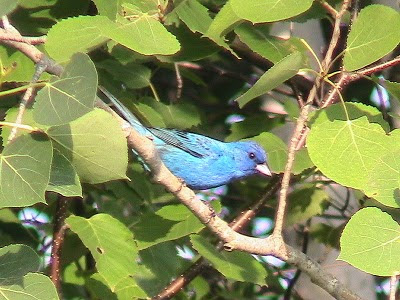 photo by needsmoreritalin, posted on Wikipedia
Yesterday, I thought I saw a flash of blue in the tree above my feeders. My eyes were not fooling me, as I spotted two bright blue, male Indigo Buntings at the bird feeders about 10:30 this morning. The females are relatively non-descript, and though I'm sure a female or two must have accompanied these blue beauties, I'll have to sit quietly outside with binoculars to be certain.  Perhaps I'll be lucky enough to get my own photo of these beautiful blue birds. However, it won't be today, as it's much cooler and very windy, not comfortable viewing conditions for these old bones!  I hope the Buntings will stay around until it's a bit warmer.

This is only the second occasion that Indigo Buntings have visited my yard, the first being around 10 or more years ago. Where have you been hiding, my pretties?

The Hummers (birds, not vehicles) are here 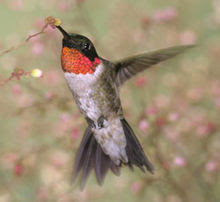 Image: Wikipedia
The first hummingbird of the season arrived at my feeder this morning; a beautiful, male ruby-throated bird.  A true spirit-lifter!  I was fortunate to be looking out the window at the time (an activity in which I engage all too much), checking my other bird feeders for visitors.
My hummingbird feeder has been up for almost a week, ever since I was alerted by Gardening Daughter that her sage is beginning to bloom, a sure sign (to her) that hummingbirds will be arriving soon.
I have been visited in recent days by a horde of flashing-winged male goldfinches. They are late-comers, having been preceded by the females by several weeks.  They are good eaters, those little birds; I have to fill their feeders every day. They prefer Niger Thistle seed, a pricy, but well worth the cost, bird food.  Ah, well --you know what is said about money: "you can't take it with you."

The perennial plants in my flower beds which have lain dormant through the winter are emerging. My Tropicana Cannas are back in full force, surrounded by weeds, I fear.  I've got a bit of work to do there; the chickweed is rampant. Fortunately, chickweed is easy to pull out -- the growth is in the stems, not in the roots.
I can tell my memory's going. When I look at the emerging shoots, I realize I've lost track of what's what in some cases. Lilies I recognize, but there are other plants about which I have no clue. I'll just have to wait until the blooms come to be sure what I've got.  Can I say create a "Garden Layout?"
I've purchased a few new plants for the front beds. I lost my lavender to the excessive rain we had late last year. I intend to replace it with two different varieties, and think I may place them in a large pot where I can control the water input. Lavender doesn't like wet feet, I've been told.
I also bought new herbs: sage, basil and rosemary.  My small rosemary also bit the dust over the winter. I know that rosemary can live for years if it's in the right place.  Just last summer, I finally removed a 20-yr old plant that had been damaged by an ice-laden falling limb.

It's a sort of gloomy day today.  Rain is in the forecast, and I hope it materializes. We need it, badly.  Our city is under a "burn ban" for the entire month of April.  I'm not a burner, except in drastic situations, preferring to send my yard "trash" to the city's compost facility.  Such stuff is picked up at the curb every Wednesday. What could be easier?
Wishing you all a happy week end.

Pat - Arkansas
Jacksonville, Arkansas, United States
Retired from Banking and Human Resources Consulting, I'm enjoying the time to relax, read mystery books, and use rubber stamps (thus the "Stamper" part of my blog name) to create greeting cards and other art work for my friends and family. I'm an avid blog reader, an amateur photographer/ writer/ poet, and an active member of my local Episcopal church.

Unless otherwise indicated, this blog contains my own writing and photographs to which I hold the copyright. If I did not create something that I share here, I will always give attribution, if known. Please inquire before borrowing anything from this site. You may e-mail me at patsschado_at_ yahoo_ dot_com. I'm very agreeable, if asked nicely.

"Don't let what you cannot do interfere with what you can do." - John Wooden
"Life is short, and we do not have too much time to gladden the hearts of those who travel this way with us. So be swift to love, make haste to be kind." -- Henri Frederic Amiel (1821-1881)

"If wrinkles must be written upon our brows, let them not be written on the heart. The spirit should never grow old." - James A. Garfield (1831-1881)

Phases of the Moon